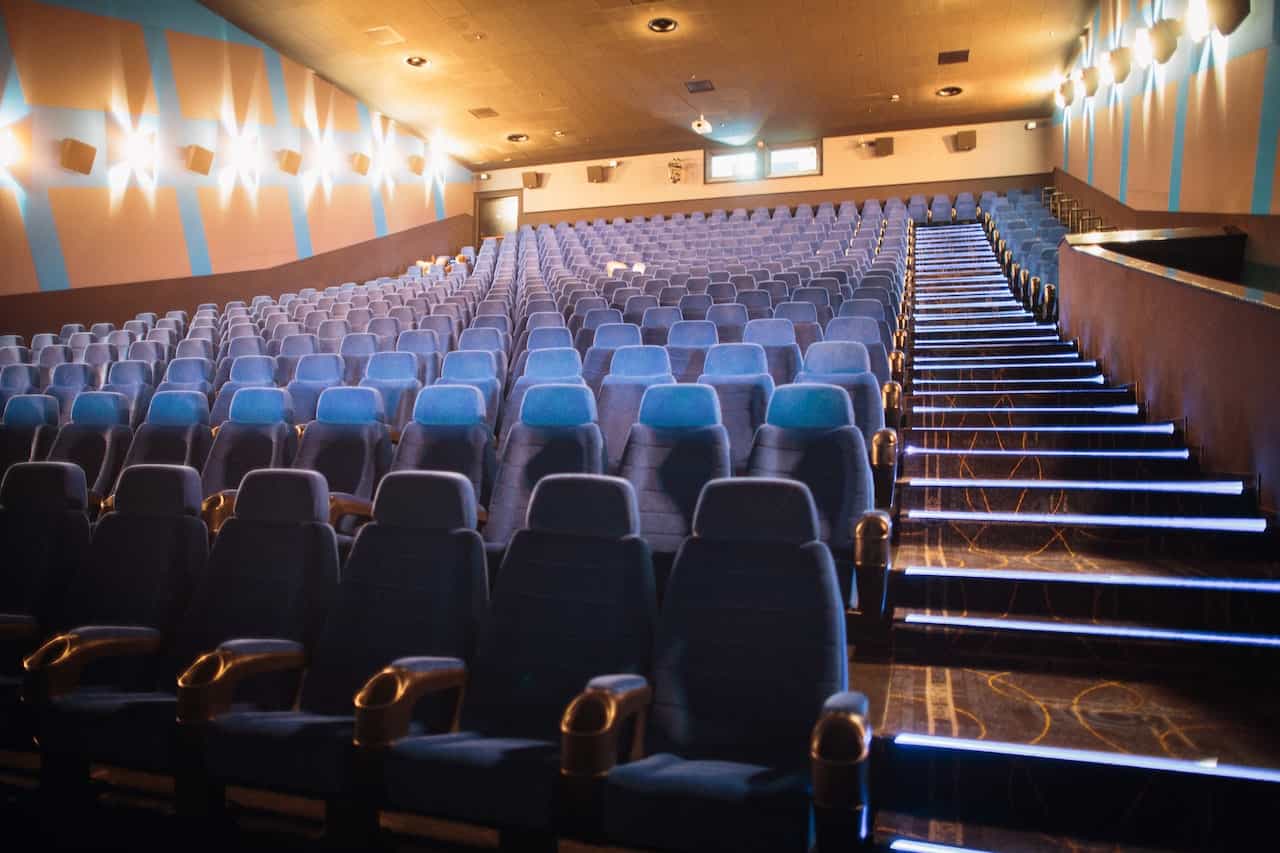 How Much Does A Movie Theater Projector Cost? The difference between watching your favorite show or movie on a laptop and at a full-fledged professional theater is evident if you are a movie enthusiast.

To paraphrase my words in simpler terms, no matter how boring a movie is, the interest of viewers suddenly spikes if it’s being watched on a massive silver screen with a robust sound system.

However, due to the unfortunate events of pandemics leading to the demise of cinema and movie theaters, things have started to look bleak for both the artists and the audience that had a keen interest in such entertainment.

Nonetheless, it is not the end of visual entertainment yet because what if I tell you that you could have the same experience by staying in the comfort of your bed by having a miniature form of cinema at home?

Because to every problem, there is almost always a workaround, and today the buzzword for the economy halting pandemic is “Movie theater Projectors”

Now you may be wondering, how much does a movie theater projector cost to replicate such a joyful experience, which is why I curated this article to give you an immaculate answer.

How Much Does A Movie Theater Projector Cost-Average Price

The prices of projectors have come down considerably in recent years due to advancements in technology. But, if you want to purchase a top-of-the-line projector, you will still have to spend a good amount of money and the price vary depending on different factors that will be discussed in the next section.

What factors affect the price of a movie theater projector?

There are a few factors that affect the price of a movie theater projector. The most important factor is the type of projector, as there are different types of projectors available in the market, each with its own set of features and capabilities.

The other factors that can affect the price of a movie theater projector include the lumens, contrast ratio, resolution, and throw ratio. Let’s take a look at each of these factors in detail.

The type of projector is the most important factor that affects the price. There are three main types of projectors – DLP, LCD, and LED.

The contrast ratio is the difference between the brightest white and the darkest black that the projector can create. A contrast ratio of 2000:1 is considered to be good for a movie theater projector.

The resolution of a projector is the number of pixels that it can display. The higher the resolution, the sharper the image will be. A resolution of 1080p is considered to be good for a movie theater projector.

The throw ratio is the distance of the projector from the screen divided by the width of the image. A throw ratio of 1.5:1 is considered to be good for a movie theater projector.

Depending on these factors, the price of a movie theater projector can vary.

What Kind Of Projectors Are Used In Movie Theaters

Just a disclaimer, before we proceed don’t assume and confuse yourself with a consumer-grade projector that is far smaller, compact, has inferior technology, and is considerably cheaper as compared to a full-fledged movie theater projector.

There are three kinds of projectors that are commonly used for commercial use,

Theaters nowadays tend to use DCP or Digital Cinema Projectors which are mainly designed for the exact same purpose to boast a massive resolution and mouthwatering bitrate to give you an eye-popping experience.

The best part about these projectors is that they are considerably cheaper as compared to the latter mentioned in the list above and at the same time quite efficient because they offer the best bang for your buck at only 1000-1200 dollars just to change its lamp.

If you want to find out the price of the whole setup, projectors like NC3200S which is considered the brightest projector in the market cost around 50000 dollars.

Bi-Xenon Projectors or in other words an absolute behemoth of a projector, not only in size but also in price point, are no doubt huge and require gigantic space for themselves to accommodate.

In terms of procurement, they cost an arm and a leg with a price tag of 200000 dollars for the whole thing.

A true relic from the past, provides visual entertainment for the viewers through a 35 MM film reel which would be displayed frame by frame in front of a light source that would be projected onto a silver screen.

These sorts of projectors gave rise to the world of projectors which we now know as cinema, they aren’t the sharpest tool in the shed but rather a first step in the industry.

For commercial use, there are many different brands that manufacture movie theater projectors. Some of the most popular brands include

For home use, there are also many different brands that manufacture movie theater projectors. Some of the most popular brands include

These brands offer a wide range of projectors with different features and price points. So, you can choose a projector from any of these brands based on your specific needs and budget.

What Projector does an IMAX Theater use?

Today, most of us are well familiar with the IMAX brand. We might have even seen an IMAX movie at our local theater. But, how many of us know what projector an IMAX theater uses?

IMAX theaters use a special type of projector called the IMAX Digital Projection System. This projector is designed specifically for IMAX theaters and offers a number of features that are not available in other projectors. It costs around 600,000 dollars.

Some of the key features of the IMAX Digital Projection System include:

The IMAX Digital Projection System has a resolution of 4096×2160, which is 4 times the resolution of a standard 1080p projector. This allows for a much sharper and clearer image.

The IMAX Digital Projection System is capable of projecting an image that is up to 10 times brighter than a standard projector. This is necessary because IMAX theaters have a very large screens and the image needs to be bright enough to fill the entire screen.

The IMAX Digital Projection System is a state-of-the-art projector that offers the best possible image quality. If you want to experience the best that IMAX has to offer, then you need to see a movie in an IMAX theater that is using this projector.

How to find the best deal on a movie theater projector

1. Decide what features are important to you

2. Compare the prices of different brands and models

Once you know what features you need, you can start comparing the prices of different brands and models. You can do this by searching online or by visiting your local electronics store.

3. Be aware of any special offers or discounts

Once you’ve found a few projector models that meet your needs, you should be aware of any special offers or discounts that might be available. Sometimes, you can find a great deal on a projector by taking advantage of a special offer or discount.

By following these tips, you should be able to find the best deal on a movie theater projector.

What is a Reel-based Projector? Are they still used?

Like any other piece of equipment, movie theater projectors require regular maintenance in order to function properly. The cost of maintaining a projector varies depending on the type of projector and the frequency of use.

Why Are These Movie Projectors So Expensive?

As mentioned above, commercial movie theater projectors tend to have superior technology built into them such as bigger lenses, more Lumen Intensity brightness, and an industrial standard electrical motor.

By having a bigger lamp source and complex circulatory system, more thorough labor is needed which in turn requires considerably higher and better quality materials to compose these projectors.

Moreover, they are also very lofty and heavy in size which skyrockets the price tags with all the shipping taxes and other convenience taxes included.

Last but not the least, the installation cost is also a headache in itself since these sorts of projectors cannot be installed as easily as you would a consumer-grade projector.

This is why extreme caution is needed through professional technical support that provides their expertise to install the projector in a movie theater.

Moreover, these professionals also maintain the equipment and prevent any sort of error and malfunction that may arise over a period of use.

Let’s take a look at some common questions regarding the keyword “How Much Does A Movie Theater Projector Cost”.

Q: Is it worth spending more on a higher-end projector?

Q: How often should I replace the projector bulb?

Q: Difference between an IMAX projector and a standard projector?

Q: What is the life expectancy of a movie theater projector?

Since there are plenty of brands like Sony, Epson, ViewSonic, and LG in the market which strive harder to stay in the competition, having an exact price point is considerably harder because their quotations change from day to day due to inflation adjustments.

However, while taking a glance at this article you may have found your answer on how much does a movie theater projector cost.

That being said, have a lovely day.