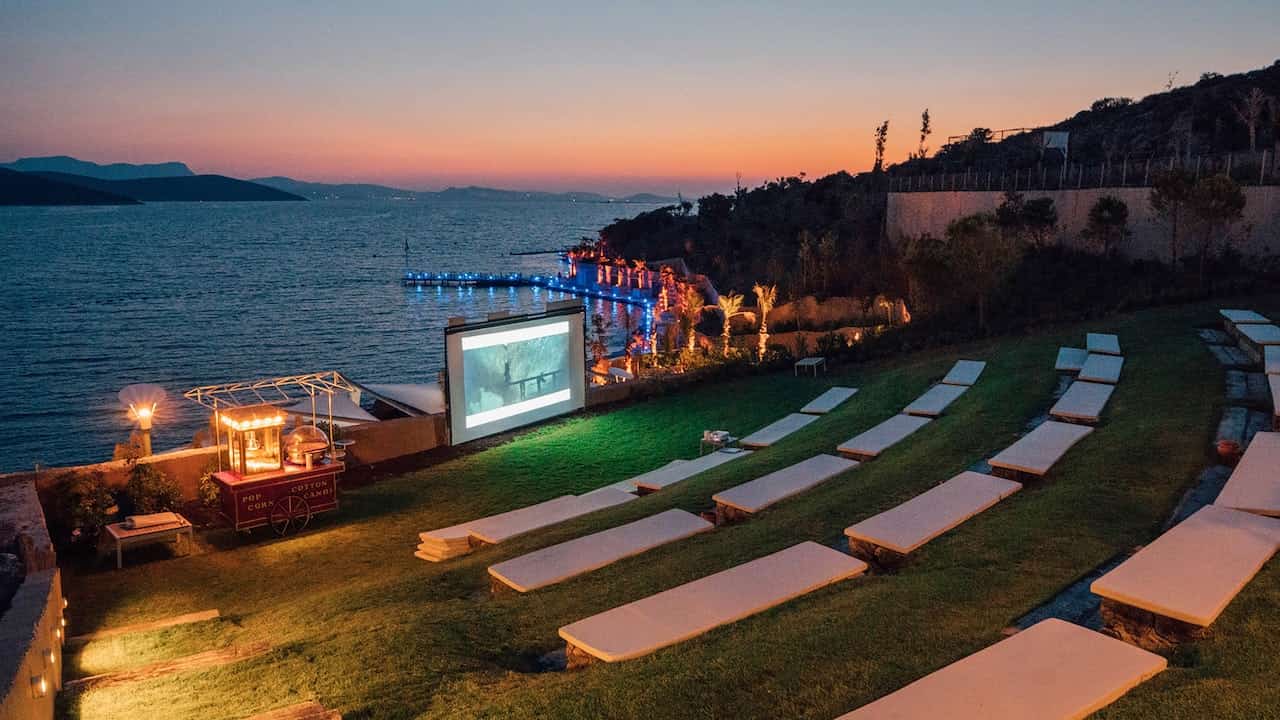 Times are no doubt changing. The tide of innovation has been rolling out as swiftly as any being can possibly imagine. Simply put, just like everything else, consumer entertainment is becoming broader to cater to everyone’s needs. I will guide you on How To Use A Projector Outside During The Day?

Although life can become boring, especially working long hours with a limited schedule period, one should always find a way to live and avoid confining themselves to the indoors.

That being said, if you are an individual that wants to watch their favorite movies, host a football match, maybe play music or advertise your startup to the public, there is no better alternative than using a projector without using a physical screen.

How To Use A Projector Outside During The Day

I know you are pondering on how to use a projector outside during the day because it would seem virtually impossible to do so, let me tell you that long gone are the days when projectors would only be confined to pitch-black rooms.

It is pretty much obvious that there is no possible light projection, currently present, which would be stronger than the rays of the sun. This means theoretically it is almost impossible for you to get hands-on with any projector that would directly counter the piercing rays of mother nature.

However, there is still some workaround, which might let you have the fun you are so craving.

A projector works by emitting numerous light rays manipulated through its wavelength from a light source such as an LED to project images or videos on a surface known as a screen.

These rays, when reaching their implied path, form together that are viewed by a consumer, and the higher the intensity of these rays, the better the depth of field of these images would be.

In other words, a projector with a higher Lumen count would simply have a much higher chance to be projected without getting shunned by ambient lighting such as sunrays.

Getting around the first factor is pretty straightforward, however, things may get tricky while countering ambient lighting such as getting a projector with a strong laser light source with decent Lumen intensity ranging anywhere from 5000 to 10000.

Although you might still be requiring some sort of shade in order to get the possible outlook of your imagery without experiencing fading out due to immense lightning that is directly affecting the projection.

Just like I mentioned above, it is highly important to keep your projector in a place that isn’t directly affected by the sun such as a shady place or somewhere where at least the screen has a little bit of roof or any other external surface to create a shadow.

Moreover, this will also protect your hardware from dust and debris and keep it from heating up and inevitably damaging the internal density aspect of your projector, if it doesn’t have a proper heat dissipation system.

4: Getting a decent display screen

I cannot emphasize enough how much choosing the right type of display screen matters. In order to get the best possible output from your projector to work with sufficient light, you need to have some sort of decent screen with a reflective coating that would illuminate your projection as much as possible without making it look extremely muddy and washed out.

Choosing a projector with a decent output of screen size is highly important because if it has a larger screen size than the surface provided, the image projection would not only look out of focus but also would be scattered all over the place which would produce very dim projection that would make it harder to view if you have a larger audience.

Getting the right contrast ratio is also highly important to prevent your images to look pixelated when emulated on higher resolution with a locked refresh rate.

Moreover, a higher contrast ratio such as 10000: 1 or higher would give a pleasant color output with crisp sharp results which would make the image very serviceable to the viewer’s eyes.

Last but not the least, it is pretty much evident that you can’t have fun without having a decent sound system that would fill in your backyard or the street where you are projecting your videos. This is why you need to invest in massive Bluetooth speakers that either have a decent 7.1 surround sound system or a stereo filter so that they can perfectly sync with your imagery.

Tips for using a projector outside during the day

When using a projector outside during the day, it is important to take certain factors into consideration:

– make sure that the projector is properly set up and that all cables are secured and properly connected. This will help to ensure consistent performance and avoid any potential damage to the projector.

– consider the angle of the sun when setting up the projector. It is important to ensure that the sun is not shining directly into the projector, as this can cause glare and make it difficult to see the image.

– use a screen or other surface that is white or light in color to reflect the light from the projector. This will help to make the image easier to see.

– make sure that the area around the projector is clear of any obstacles that could block the light from the projector.

This includes trees, buildings, and other objects that could cast a shadow on the screen.

– use a higher-quality projector bulb for best results. This will help to ensure a clear and bright image.

– consider using a projector with a built-in cooling system, as this can help to keep the unit from overheating in bright, sunny conditions.

With these tips in mind, using a projector outside during the day can be a successful and enjoyable experience.

Here are some common questions and answers about using a projector outside during the day:

Q: Are there any problems with projecting in direct sunlight?

A: Yes, it is generally not recommended to project in direct sunlight as the bright light can cause glare and make it difficult to see the image.

Q: What are some things to avoid when using a projector outdoors?

A: You should avoid using a projector in windy or rainy conditions, as this can damage the device or cause issues with image quality. Additionally, it’s important to make sure that the projector is properly secured to prevent it from being knocked over.

Q: How can I improve the image quality when using a projector outdoors?

A: One way to improve image quality is to use a screen specifically designed for outdoor use. Additionally, you can try to increase the contrast of the image by using a brighter projector or changing the angle at which the projector is pointing.

Q: How do I prevent the projector from overheating?

A: You should avoid using the projector for extended periods of time and make sure to give the device regular breaks to allow it to cool down. Additionally, you can use a cooling fan or other external cooling methods to help keep the projector from overheating.

Q: How can I reduce glare when using a projector outdoors?

A: Glare can be reduced by using a screen with a matte finish or by attaching an anti-glare sheet to the front of the projector. Additionally, you can try to adjust the angle of the projector to reduce the amount of direct light that hits the screen.

Whether you’re using a projector for work presentations or outdoor movie nights, it’s important to understand how to use your device properly when outdoors.

So these are the 7 important tips you need to keep in mind in order to know how to use a projector outside during the day. Although achieving these feats is easier said than done, be assured it is totally worth the effort and you would be having tons of fun if done correctly.

That being said, I hope this article wasn’t too confusing for you because I kept it as straightforward as possible.

If you run into any issues, kindly do let me know in the comment section below.